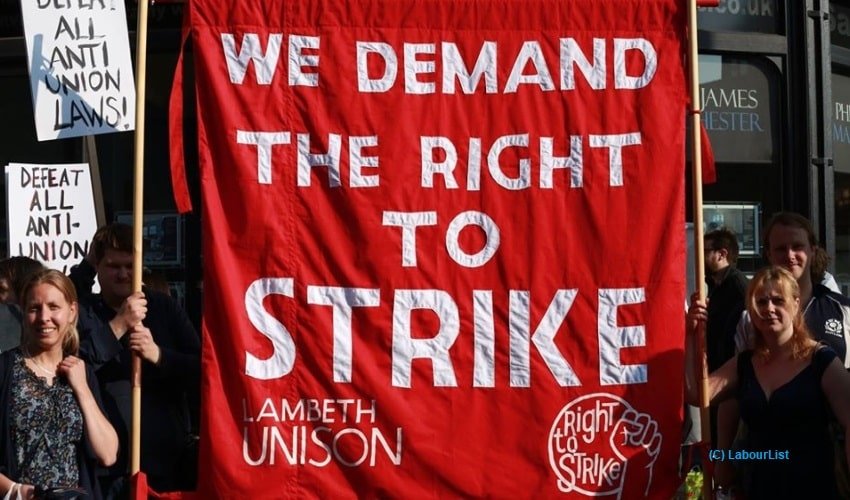 Members of Parliament, union leaders and grassroots activists came together to demand that anti-trade union laws are repealed and strikes of unions are not restricted.

Members of Parliament, union leaders and grassroots activists came together to demand that anti-trade union laws are repealed and strikes of unions are not restricted.

The Free Our Unions campaign, which is backed by dozens of unions branches, committees, and local Labour Parties, has written an open letter to highlight the urgency of fighting anti-trade union laws, which are especially restrictive during the coronavirus pandemic. The campaign was initially established to amplify policies passed at Labour Party conferences which focussed on the repeal of all anti-union laws but since the election of the hard-right Tory government, they have been fighting against the increasing restrictions that are being placed on the functioning of unions.

The letter states that workers are being made to pay the price for the pandemic even as the conservative government stifles demands of the anti-racism movement and unfetters the chains of activities that lead to runaway climate change. The right to strike is paramount, it said, seeking “maximum legal and effective freedom” for expressing political protest and social solidarity through their right to strike. The pandemic has laid bare how Britain’s anti-union and anti-strike laws are impeding the improvement of workplace health and safety.

They highlighted the case of a recent walkout by garbage workers in Glasgow, which demonstrates how long notice periods and bureaucratic hurdles placed before the unions prevent them from responding immediately to workplace issues. On September 9, refuse workers walked out in response to the council’s unilateral decision to increase work hours. This, the union felt, would violate the distancing rules that had been put into place. But any official action would have meant waiting for many weeks, including notice periods and conduct of individual postal ballots.

The council went as far as to describe the action as “illegal” in a social media post. It was deleted after critics pointed out that not following procedures didn’t make it illegal, it just meant workers might not have same legal protections against disciplinary action, a risk that the workers were willing to take. The union eventually agreed to a phased return to full hours over the next six weeks. This highlights how the current laws are designed against industrial action that can assert the demands of the workers effectively. This is why, the letter said, much of the workers’ actions towards better rights and safety during these pandemic days have been ‘unofficial’.