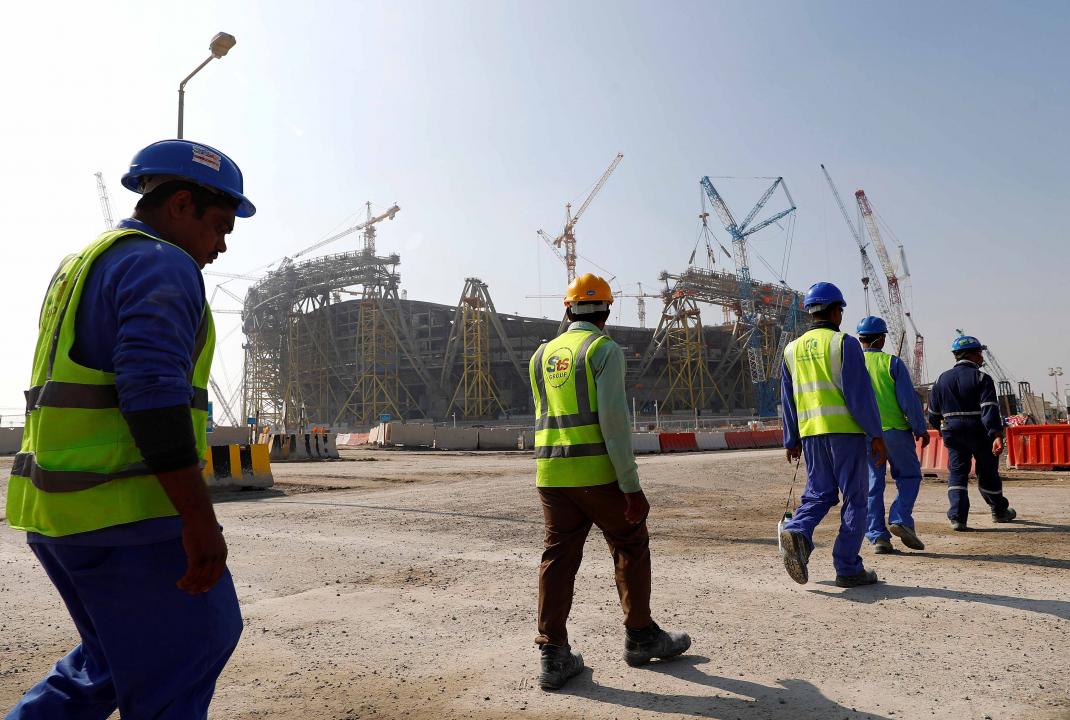 Last month Qatar deported hundreds of Nepali workers, most of them building infrastructure for the 2022 FIFA World Cup, under the pretext of testing them for the coronavirus, raising new fears about the fate of South Asian migrant workers in the Gulf country during the novel coronavirus pandemic. According to civil activists in Doha, the expelled workers had no opportunity to collect their belongings, take their payments or benefits, as well as no opportunity to challenge the expulsion.

Amnesty International interviewed twenty of the victims, coerced and detained last month in egregious conditions after officials assured them, they could return to their accommodations, only to kick them out of the country after later without testing everyone. Only few even had their temperatures checked. The migrant workers were detained in Industrial Area, Barwa City, and Labour City in Doha and deviously told by the police that it was only a medical check-up. The Qatar police took biometric information from the foreign workers crammed in the detention center before putting them in over-crowded accommodation without providing adequate food and water.

“None of the men we spoke to had received any explanation for why they were treated this way, nor were they able to challenge their detention or expulsion. After spending days in inhumane detention conditions, many were not even given the chance to collect their belongings before they were put on planes to Nepal,” said Steve Cockburn, Amnesty International’s Deputy Director of Global Issues, stressing that it is disturbing that the Qatari authorities appear to have used the pandemic as a smokescreen for further abuses against migrant workers, many of whom feel police misled them by saying that they were to be ‘tested’. COVID-19 is no excuse for arbitrarily rounding people up, Amnesty International pointed out.

“None of the men we spoke to had received any explanation for why they were treated this way, nor were they able to challenge their detention or expulsion. After spending days in inhumane detention conditions, many were not even given the chance to collect their belongings before they were put on planes to Nepal,” said Steve Cockburn, Amnesty International’s Deputy Director.

Some workers said the police spoke to them in Arabic and the only word they could understand was ‘Corona’. One man told Amnesty International: “We were asked to stop to test for the virus. Police told us that the doctor would come and check the virus. But they lied to us.” The men were then crammed on to buses, and taken to a detention facility in the Industrial Area where their documents and mobile phones were confiscated, before having their photographs and fingerprints taken. The workers were detained in inhumane conditions alongside scores of other people from various countries. They were held in overcrowded cells without beds or bedding, and not given enough food or water.

Another Nepali man said: “The jail was full of people. We were given one piece of bread each day, which was not enough. All the people were fed in a group, with food lying on plastic on the floor. Some were not able to snatch the food because of the crowd.”

The Doha Industrial Area, already infamous for slum conditions and overcrowded camps, is now under strict police monitoring and effectively sealed off. The area mostly hosts workers building infrastructure for the 2022 FIFA World Cup, who even before the pandemic faced poor conditions and unsafe workspaces. The Qatari government has denied the allegations, while Amnesty International is calling on Doha authorities to ensure that any worker detained and threatened with expulsion is informed of the reasons and allowed to challenge them. In its public report the organization writes: “Qatar should also ensure effective remedy and reparation for any worker whose rights have been violated. The Qatari authorities must also ensure all migrant workers’ right to health is fully protected during the COVID-19 crisis”.

94% of COVID-19 cases in Qatar are foreigners, daily stats show