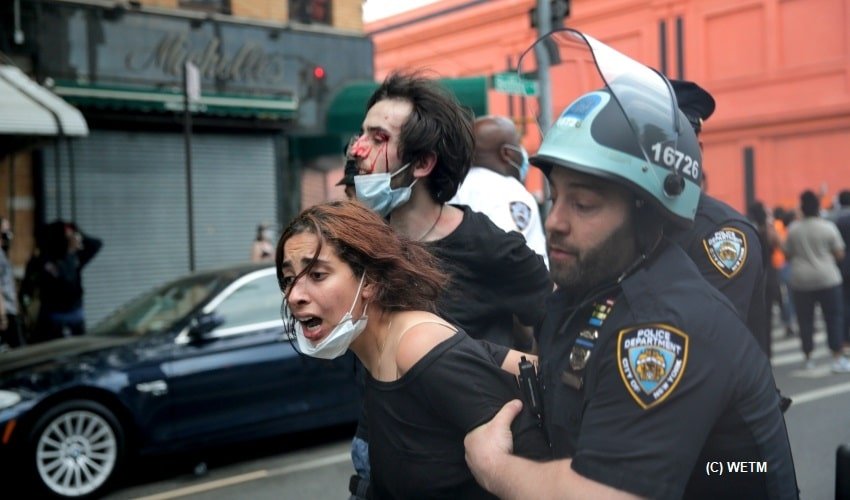 The New York Civil Liberties Union and the Legal Aid Society on Monday filed a lawsuit against the New York Police Department (NYPD) on behalf of the protesters who have alleged that the police officers used excessive force during the demonstrations against the killing of George Floyd.

As per a statement, the protesters have sued Mayor Bill de Blasio, NYPD Chief Terence Monahan, Police Commissioner Dermot Shea, and several other NYPD officers, alleging that they were beaten and assaulted by the police for carrying out peaceful protests.

It has been 0 days since the last Police Brutality incident.

The two civil rights organisations have reportedly filed the lawsuit in Manhattan federal court on the behalf of 11 plaintiffs, who have claimed that the police used indiscriminate violence against them at protests in Manhattan, Brooklyn and the Bronx between May 28 and June 28. In the lawsuit, the city leadership has been accused of allowing police to use violence against the protesters and detaining them for several hours. The lawsuit also claims that several protesters were put behind bars without proper medical supervision or PPE in a bid to prevent the spread of COVID-19.

The civil rights organisations are seeking monetary damages for the 11 plaintiffs along with certain reforms such as training the officers to respect protesters’ rights and action against those officers who used violent force against the demonstrators. The lawsuit also seeks the court to declare that the aggressive actions taken by the NYPD against protesters were unconstitutional.

As per the lawsuit, one plaintiff was beaten with batons by three cops on June 3 in Brooklyn due to which he suffered a broken arm. It also alleges that the police used a tactic called “kettling” to encircle the protesters so they could not escape. Furthermore, arrested protesters were placed in severely tight plastic handcuffs which resulted in long-term injuries for some of them.

In the lawsuit, the plaintiffs have accused the city of violating their constitutional rights, and are suing the officials and police department for compensatory and punitive damages.

In the aftermath of the killing of George Floyd at the hands of police on May 25, tens of thousands of people took to the streets across the country to carry out peaceful protests against police brutality.

As per a report published by Human Rights Watch in September, the NYPD “planned the assault and mass arrests” of peaceful demonstrators at a June 4 protest in the Bronx. According to a preliminary investigation carried out by New York Attorney General Letitia James in the allegations of police misconduct during the protests, more than 2,000 protest-related arrests were made by the NYPD officers between May 28 and June 7.

ILO and IOM ink pact to sustainable and ethical migration