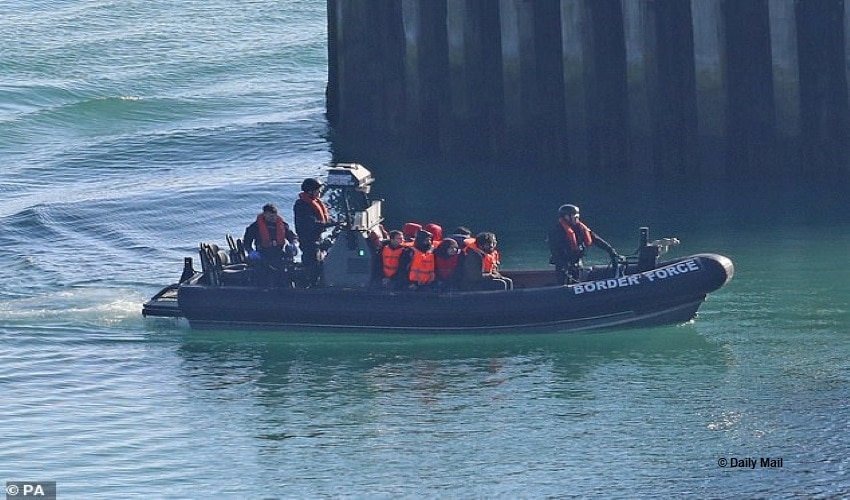 The United Kingdom is now receiving a surge of migrants from across the world through small boats on sea. Of these, official sources have reported as many as 17 unaccompanied children.

The United Kingdom is now receiving a surge of migrants from across the world through small boats on sea. Of these, official sources have reported as many as 17 unaccompanied children.  According to Kent County Council (KCC), as many as 23 under 18s have now been taken into care arriving on its shores this week.

In total more than 200 migrants are said to have arrived through the English Channel in 17 small boats. The UK government is now making arrangements to send them to parts of Europe in sets of 20 at a time. Due to Covid-19 restrictions, it is imperative to maintain the social distancing norms.

Most of the migrants have found their way through the English Channel at the Port of Dover.  They were intercepted by border security personnel soon after arrival.

Strangely, the number of children arriving in unaccompanied shows the desperation of parents to protect their future. Since May, officials confirm, UK has received 220 children. Since 2019, more than 5000 asylum seekers have tried to enter the UK through the English Channel. UK administration is now making arrangements for them to be sent back to France and Germany where the countries might provide these migrants asylum.  This comes under the Dublin-III European Union deal under which the UK has the right to send back anyone who is seeking asylum if they could have reasonably claimed it in another country along the way.

Shocking invasion on the Kent Coast taken this morning. pic.twitter.com/iuzAF0Uxz4

The deal comes to an end after the end of the Brexit transition period in January 2021, unless the UK and EU agree to renew this one or agree on a similar new deal.

The United Kingdom has shown great clemency in receiving more than 4000 asylum seekers since January 2019. But this seems to have become a challenge as people continue to flow into through the English Channel, despite the fact that France has repeatedly tried to intercept the surge before it reaches England. Most of the ones travelling across are coming from war laden chaotic parts of the world seeking refuge. Recent arrivals have included entire families from Yemen, Eritrea, Chad, Egypt, Sudan and Iraq. Many ask to claim asylum once they are picked up by the UK authorities. Others are economic migrants who have no real claim for refuge. They are seeking to work in the UK without applying for a visa because they think it is better than staying in their homelands. It is no surprise then that this has become an organised business model as well. Over the last 20 years, crime gangs have been known to earn a fortune by smuggling people from Asia and Africa across Europe. When land routes have been shut with heightened security, sea routes are now being exploited by people from across Europe and Asia.

It’s very straightforward to find out any matter on web as compared
to textbooks, as I found this paragraph at this website.

Excellent post. Keep posting such kind of information on your
page. Im really impressed by it.
Hi there, You’ve done an excellent job. I
will definitely digg it and individually recommend
to my friends. I’m sure they’ll be benefited from this web site.

Excellent post! We are linking to this great article on our website.
Keep up the great writing.

Hello, There’s no doubt that your site could possibly be having web browser compatibility problems.

When I take a look at your web site in Safari, it looks
fine but when opening in Internet Explorer, it’s got some
overlapping issues. I just wanted to provide you with a quick heads up!
Other than that, wonderful blog!

An outstanding share! I’ve just forwarded this onto a colleague who was
conducting a little homework on this. And he actually bought me breakfast due to
the fact that I found it for him… lol. So allow me to reword this….
Thank YOU for the meal!! But yeah, thanks for spending some
time to discuss this issue here on your website.

Tremendous things here. I’m very glad to look your article.
Thank you so much and I’m having a look ahead to touch you.

Will you kindly drop me a e-mail?

We’re a group of volunteers and starting a new scheme in our community.
Your site offered us with valuable information to work on. You have done a formidable job and our whole neighborhood will probably
be thankful to you.

I savor, lead to I found just what I was looking for.
You’ve ended my 4 day lengthy hunt! God Bless you man. Have a nice day.
Bye

Howdy just wanted to give you a quick heads
up. The text in your content seem to be running off the screen in Safari.
I’m not sure if this is a formatting issue or something to do with browser compatibility but
I figured I’d post to let you know. The style and design look great though!
Hope you get the issue resolved soon. Kudos

I need to too thank you for this grewt read!! I certainly enjoyed evesry
bbit of it. I havee you saved as a favorite to check out new stuff you post…

This page truuly has all the information I wanted about this subject and didn’t know who to ask.

It’s really very complex in this full of activity life to listen news on TV, so I only
use internet for that purpose, and get the most up-to-date information.

I truly love your site.. Very nice colors & theme.
Did you create this website yourself? Please reply back as I’m looking to create
my own personal website and would like to find out where you
got this from or exactly what the theme is named.

An impressive share! I have just forwarded this onto a colleague who was conducting a little homework on this.
And he actually bought me breakfast due to the fact that
I discovered it for him… lol. So let me reword this….
Thank YOU for the meal!! But yeah, thanx for spending
some time to discuss this topic here on your site.