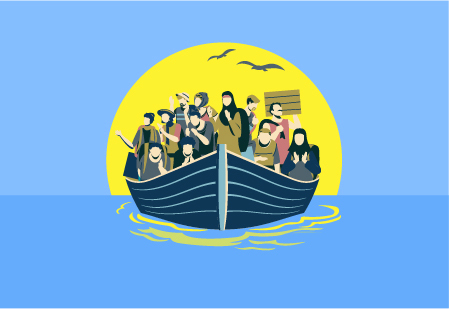 NGOs providing aid to migrants, rather took the policy a notch up

In its blatant violation of human rights, Italy continues to criminalise the organisations working towards helping and rescuing migrants. Over the years the issue has only grown deeper in the country and across the continent. Amnesty International in its 2019-2020 report, unveiled how Italy was continuing its hostile policy against NGOs providing aid to migrants, rather took the policy a notch up by imprisoning members of such organisations, under severe criminal charges.

The head of the Italian office of Amnesty International, Emanuele Russo, said that the issue raised human rights concern, not only in Italy but across Europe as other nations including Germany, France, Spain, Poland, Hungary, Switzerland and many other European nations have adopted a similar policy.

The spokesman for the Italian office of Amnesty International, Riccardo Noury, said while presenting the report that European Union seemed to have criminalised the move in solidarity.

“In Europe, France, Switzerland and other countries have introduced words such as ‘reception’, ‘rescue’ and ‘aid’ — words that are linked to justice and good things — into their criminal codes,” Noury said, adding that “many European countries have continued the illegal practice of sending Afghans back towards a country they consider safe but which in reality sees a rise in civilian deaths every year.”

Besides Amnesty, openDemocracy carried out a detailed investigative report with the help of journalists across Europe andexposed the longest known list of more than 250 people across 14 countries who were arrested, charged or investigated under a range of laws over the past five years for supporting and rescuing migrants. The report showed how nations across Europe criminalised acts that facilitate illegal immigration. Some nations even treated such humanitarian actors with laws intended to deter human trafficking. The list of victims includes search and rescue boat crews and volunteer lifeguards.

A rescue boat NGO, Sea-Watch, told EUobserver, in an email that Frontex, the EU border agency, never sends it any alert to rescue people even when it spots ‘distress cases (in Mediterranean Sea), as they know we would then take people to a safe port in Europe’.

In contrast to the above report, Italian government justified its move, as the Italian Interior Ministry has said the country would receive at least 20,000 migrants, set out from the coast of North Africa, especially from Tunisia and Libya. Italy sees this migration nothing less than a threat especially in the times of coronavirus pandemic.

As per the intelligence sources, the issue might not only be of refugee crisis but a way devised by the Libyan Presidential Council, Fayez Al-Sarraj, to pressurise Italy and even EU for aid. Tripoli has repeated asked for new patrol ships and other modem equipment for monitoring the coast, as committed earlier by the Italian government. In November 2019, Italy signed the Memorandum of Understanding with Libya, to maintain  cooperation among the two countries on the issue of migration and the agreement was automatically renewed for another three years starting from February 2020.

US sanctions $5.5 million aid to Nepal to tackle impacts of Covid crisis, says US embassy to Nepal