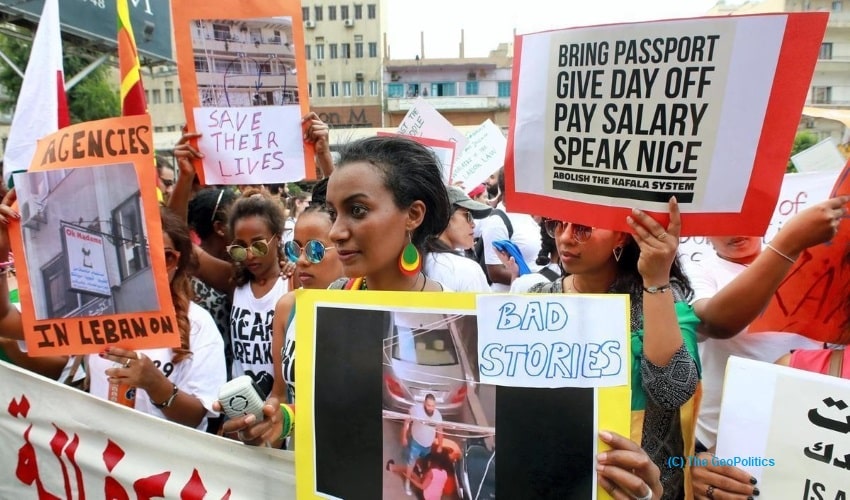 Lebanon takes first step in the same direction. Kafala System, common in Middle East, is an abusive system which binds migrant workers to their employers, reduces them to slaves.

Almost a week after Qatar introduced labor reforms, abolishing the Kafala (Sponsorship) System, Lebanon takes first step in the same direction. Kafala System, common in Middle East, is an abusive system which binds migrant workers to their employers, reduces them to slaves. On Friday the country’s Caretaker Labour Minister Lamia Yammine announced that she issued a new contract for migrant workers, a standard unified contract which “enshrines the rights” of the foreign workers. Of late the country gained quite limelight for the abuse of its foreign workers, whose plight  worsened with the country’s collapsing economy and Covid-19 pandemic outbreak.

Migrant worker, even in the most liberal and democratic economies, had been at the receiving end of the coronavirus catastrophe. Their existence was invalided further in Middle East nations with Kafala System, where they had been treated miserably even before the pandemic. Lebanon, which tops the list, has finally resorted to the international pressure of introducing labor reforms.

Lebanon’s estimated 250,000 migrant domestic workers, mostly from Africa and Asia, are excluded from the country’s labor law protections including requirement for a minimum wage, overtime pay and freedom of association, says @hrw. https://t.co/sBUdK71twu

As per the estimated figures, Lebanon has about 250,000 migrant domestic workers, mostly from Africa and Asia, who are not entitled to the country’s labor law protections including requirement for a minimum wage, overtime pay and freedom of association, according to Human Rights Watch.

Rights groups welcomed the country’s first step in the right direction but highlighted that a lot needed to be done in order to make Lebanon a safe place for migrant workers, especially domestic workers. The activists warned that without strict enforcement of the contract, including labour inspections and complaints procedures, the new contract would hold no significance. The country needs to take firmer actions in order to dismantle the kafala system.

“As we’re seeing today a number of workers were abandoned by their employers on the street without wages, without luggage, without passports, and no employer was held to account,” she told the Thomson Reuters Foundation.

“One of the main problems that still exists because of kafala is that the worker is living most of the time with her employer behind closed doors,” she said. “Effectively this means as soon as I close the door nobody knows if I am enforcing the contract or not.”