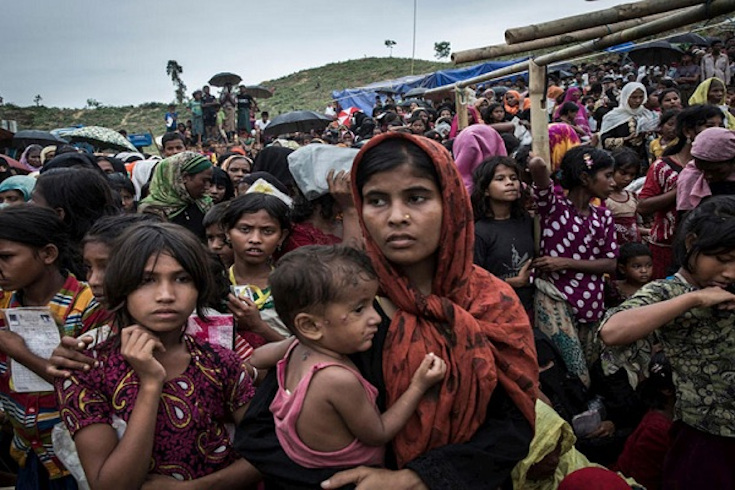 A United Nations fact-finding mission warned today that about 600,000 Rohingya who are still in Burma are at risk of “genocide,” noting that the return of hundreds of thousands of whom the army had previously expelled remains “impossible”.

The Human Rights Council mission deemed the Burmese army’s operations in 2017 a “genocide,” and called for the trial of top generals, including its commander, Min Aung Hlaing.

740,000 Rohingya fled from Rakhine State (West Burma) in August 2017 after an army crackdown in Burma where the majority of the population is Buddhists

The mission confirmed that the 600,000 Rohingya still in Rakhine State are living in deteriorating and “unfortunate” conditions.

In its final report, to be presented in Geneva, the mission stated that it had “convincing reasons to conclude that the evidence to convince that the state had intentions to commit genocide had been strengthened since last year and that there was a“ serious threat of a new genocide. ”And it confirmed the impossibility of the return of the Rohingya refugees.

The report added that Burma “denies any wrongdoing, destroys evidence, rejects actual investigations, removes, burns, confiscates and builds lands on which the Rohingya have been displaced.” He also mentioned that the Rohingya were living in “inhuman” conditions, noting that more than 40,000 buildings were destroyed during the crackdown.

The mission renewed the request of the UN Security Council to refer the Burma file to the International Criminal Court or establish its own court similar to the former Yugoslavia or Rwanda.

She revealed that she has a secret list of more than 100 people, including officials suspected of genocide, crimes against humanity and war crimes, in addition to six generals who announced their names last year.

The report renewed its call on foreign governments and companies to stop all commercial ties with the army, calling for the “freezing” of investment and development aid in Rakhine State.

The Muslim minority was subjected to severe restrictions on movement, which made it difficult or even impossible for many of them to obtain health, education or work services.

Buddhist-majority in Burma refuses to grant Rohingya Muslims citizenship or basic rights, and refers to them as “Bengal” in a sign that they are illegal immigrants from Bangladesh. The Burmese army justified the crackdown as a way to eliminate the Rohingya rebels.

Bangladesh and Burma signed an agreement to return thousands of refugees two years ago, but no refugee has yet been returned.

“This country continues to commit crimes against humanity in inhumane acts that cause great suffering and persecution in the context of a generalized and systematic attack against the Rohingya population,” said UNMIL elements, who were not allowed to go to Burma.

They described the conditions in Burma as “unsafe and impossible” to return Rohingya refugees to their homes.

They also accused the army of new violations against civilians in northern Rakhine State.

The region was again in conflict with the Burmese army launching a campaign targeting the “Arakan Army” fighting for the ethnic rights of Buddhists in Rakhine State.

In Geneva, the United Nations Special Rapporteur on Refugees said that 65,000 people have been displaced by violence since the beginning of this year in the states of Rakhine and Chen in the midst of fighting between soldiers and Arakan army rebels.

“In Rakhine State, the Tatmadaw (Burmese army) used helicopter gunships against the Arakan Army, and the two sides are accused of indiscriminate shelling of civilian areas and the use of heavy artillery fire,” Yangi Li told the Human Rights Council.

The Human Rights Council mission accused the military in Burma of forced labor and torture. It also indicated that the Arakan Army is also accused of violations, but on a smaller scale.