Poland, where LGBT+ people are existing in defiance and in search of their missing human rights 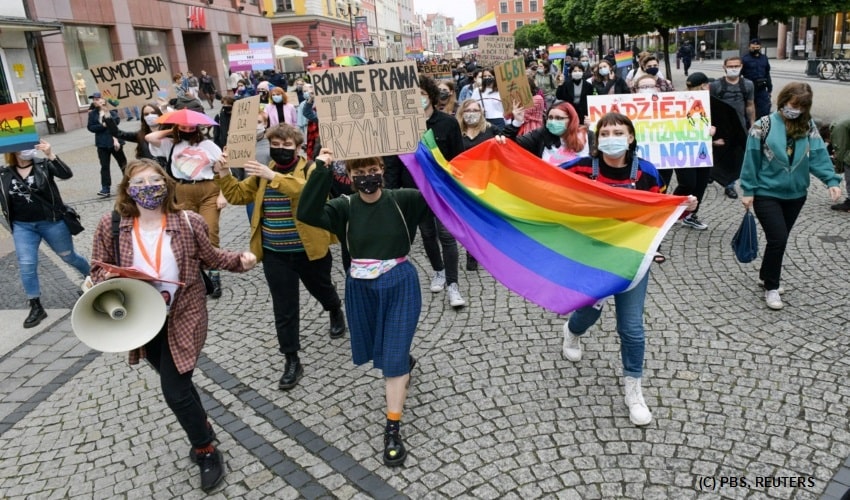 Kozy, a small town in Poland is a village charm, but not for confident outgoing people who happen to be of LGBT community

Kozy, a small town in Poland is a village charm, but not for confident outgoing people who happen to be of LGBT community. They “do not belong here”. An unofficial document reminds them to live a hidden life when in Kozy.

Last year, the Bielsko county, that includes several towns and villages and Kozy, passed a resolution that supports “traditional family values” while rejecting the rights of LGBT community for “undermining the concept of a family model.”

The resolution reads, “We encourage young people to start families which are by their essence a natural environment for self-realization.” It adds, “Families shaped by the centuries-old heritage of Christianity, which are so important for the comprehensive development of our homeland.”

The situation in Poland has reached a tipping point. The LGBTQ+ community is being denied the right to exist in their own country. We must band together to demand respect and equality for our Polish LGBTQ+ family. #PolishStonewall pic.twitter.com/hx2QDjuVBV

This region is just one example of the “LGBT-free” zones of Poland. In past one year, hundreds of such regions in Poland have come forth with such regulations. These regions cover over one-third of the European country, and over 10 million people. Overnight these regions have transformed themselves as the infamous “LGBT-free zone” of Europe.

The law in these zones is symbolically against the LGBT ideology. This has been a reason of latest collision with the European Union and allies and watchdogs across Europe. These regulations have been contested and many regions have lost their EU funding.

But the impact felt by the Polish people of LGBT community is painfully unbearable. Their existence in these towns is resented and they wish to move from there.

Earlier this year, EU conducted a massive study that reflected that LGBT+ people in Europe feel safer generally than they did five years back. However, Poland was a blatant exception where 2/3rd of gay, lesbian and transgender people reported an increase in acts of violence and intolerance against them. The decorated protection of traditional values by LGBT-free zones of Poland has attracted a comparison with Russia, where Moscow had banned LGBT “propaganda” in 2013.

Human rights are in scarcity for the LGBT+ people in Poland. Every day is an existential fight for them, a fight for existence.

China condemns US appointment of coordinator for Tibet, slams it as “political manipulation”